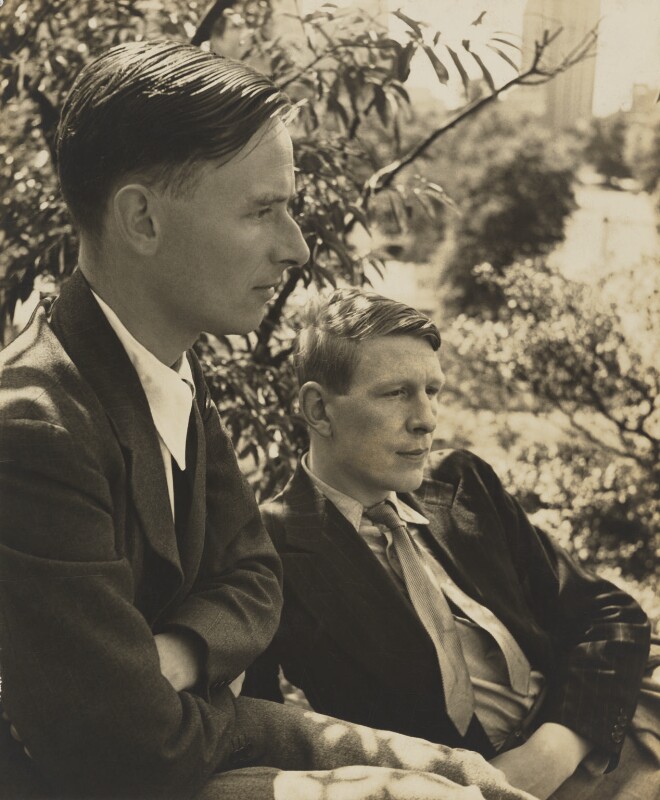 Isherwood and Auden by Louise Dahl-Wolfe

There’s a passage in one of your books in which you and Auden are on a train, and you’re savagely attacking religion, and he says: “Be careful, my dear, if you carry on like that, one day you’ll have such a conversion.” Do you think of it in those terms, as a conversion?

Yes. I rather think so. I went through all sorts of attitudes to it. There was a period when I thought I might become a monk myself.

English born Poets, Christopher Isherwood (1904-1986) (left) and W H Auden (1907-1973) smiling from the window of their train carriage as they depart from Victoria Station, London on the first leg of their journey to China, January 19th 1938. (Photo by Paul Popper/Popperfoto/Getty Images)

“If I Could Tell You”

Time will say nothing but I told you so,
Time only knows the price we have to pay;
If I could tell you I would let you know.

If we should weep when clowns put on their show,
If we should stumble when musicians play,
Time will say nothing but I told you so. . . .

The winds must come from somewhere when they blow,
There must be reasons why the leaves decay;
Time will say nothing but I told you so. . . .

Suppose the lions all get up and go,
And all the brooks and soldiers run away;
Will Time say nothing but I told you so?
If I could tell you I would let you know.

Isherwood and Auden came to the United States in 1939 and both became American citizens. Auden settling in NY, Isherwood in LA.

Isherwood preferred the city on the edge of the wilderness. Auden was a denizen of all things urban. Both were profoundly concerned with the human condition and the life of the spirit. While Isherwood was more vocal on this score, Auden quietly served others in startling, profound, and largely silent ways.

I started this post with a quote by Auden about the fuzzy border between writing and the perception of reality, about the relationship between creation and observation, and in a certain way about love. Have any of you seen “Lady Bird,” a movie directed and written by Greta Gerwig? I recommend it highly, and it contains this:

For an acutely (and lovingly) executed look at coming of age see the movie. And, if you want to see screenwriting at its best, read the script posted online by clicking right…